Firstly, thanks for coming back! I can’t believe it’s been nearly seven years since I last documented the story of Metrotown. In the time that has passed, I’ve seen the Brentwood Town Centre develop by leaps and bounds, and not surprisingly, continue to follow the pattern of growth that was first outlined in the 1960s. Lougheed is not far behind, as was to be expected. Edmonds has also come along on at its own unique pace. But Metrotown – whoa. I wish I wasn’t so tied up with work and other distractions, but what I’ve synthesized, the Metrotown Downtown Plan presents a remarkable political and planning story. As we learned in the section on Metrotown, a Metrotown Downtown Plan was originally produced in 1977.

And, here we are now, 40 years later, the very same principles of that plan have been revived.

This was an exciting time – an opportunity to reverse the unfortunate turn of events that occurred in the early 1980s, when the Burnaby Voters Association-controlled Council of the day all but scrapped the vision that the 1977 Burnaby Citizen’s Association-controlled Council adopted. Here we are in 2017, with a plan that should very uncharacteristically come as little surprise. But that was not to be the case.

I don’t want to sidetrack too much here, but I do wish to say that I regret not chiming in when this plan was vociferously attacked when it was broadcast out to the community. However, this blame should not have been levied against a very thoughtful plan. The anger should have been directed to a Provincial government of the day that had made a miserable effort to tame an overheated housing market, until the last possible moment when the writing of electoral trouble was on the wall. The inaction made me wonder whether my old friends who said that the Socreds (Social Credit Party, predecessor to the BC Liberal Party) were a boy’s club of used car salesmen and Real Estate agents was actually a truism. I have nothing against real estate professionals or used car salesmen, but the characterization plays well into the context that the government of the day was not all that concerned about introducing any controls into the marketplace. The City of Burnaby has ultimately borne the brunt of the lack of intervention. As I documented through the earlier section, The Town Centre Model, the City has shown remarkable restraint by maintaining the characteristic of single family neighborhoods and preserving existing employment areas, by focusing development opportunities within the well transit serviced Town Centres. In contrast, Vancouver has allowed communities with poor transit service like The River District and various developments along the Kingsway corridor to densify, which will invariably create traffic woes for generations to come, while other municipalities to a greater or lesser extent, have continued to allow development in inopportune green and farmland areas. Within Burnaby, the result has been intense market pressure on the redevelopment of available tracts, including predominantly low quality and low rent wood frame low-rise apartment buildings.

Mayor Derek Corrigan had been fair to make it a sport to levy criticism against senior levels of government – civic financing of affordable housing projects can be a slippery slope when the provincial or federal government is not a genuine long term partner. Sure a municipality can occasionally undertake a few projects one at a time – but without significant senior government involvement, the process is a case-by-case arduous and time-consuming exercise. And, I recall unsubscribing to BC Housing updates when I realized I was receiving photo-op announcements about projects three times – when it was initially funded, when it broke ground, and when it was officially opened – giving the impression that three times the number of projects were being completed by the Provincial Government.

My point on this sidebar is that the municipality has historically had very limited resources to control market forces. And, if a municipality penalizes the market arbitrarily, in the best case scenario, a developer could sue the pants off a city; in the worst case scenario, development opportunities could evaporate entirely, allowing neighbouring municipalities to grow and diversify, leaving the city to deal with all the traffic and none of the benefits.

During Public Hearings and the final adoption of the Metrotown Downtown Plan, the news headlines roared about the rising resentment of displaced residents and protesters decrying the evilness of it all. Even articles discussing how the plan was finally bringing in an opportunity to break up the megablocks of the supermall that has sucked the life out of public space and stunted the neighbourhood’s opportunity for so many years couldn’t avoid covering the negative reaction to the plan. What should have been a celebration that the Metrotown neighbourhood finally had an opportunity to realize the original dynamic and deeply exciting plan, turned into a flashpoint around the demolition of the Maywood neighbourhood. 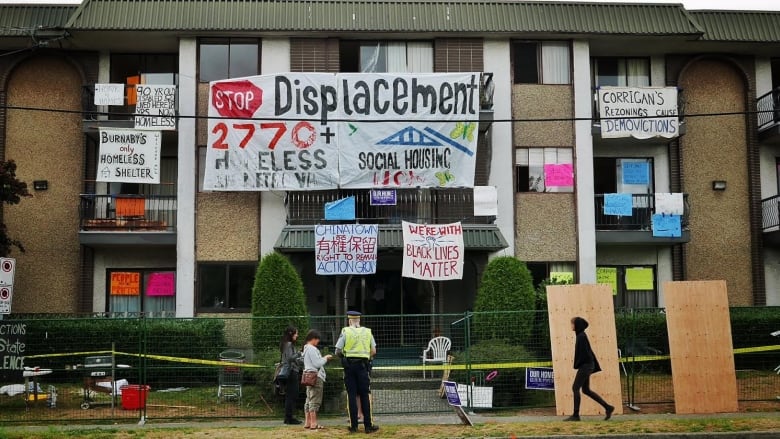 While the displacement of the residents of the Maywood neighbourhood was an unfortunate situation that has led to the regrettable loss of some long term residents, it was not a problem of the municipality’s making. I went into one of the apartments in Maywood once, and thought my lungs were going to collapse from the foul odour of mould from a likely leaky roof. Not to say that they were all like that – but many of these properties were not built with quality and durability in mind. I know – an old friend of mine who was around in the day that these were built recounted to me once that the developers were interested in building the simplest, cheapest, and quickest to erect structures possible. But, they were affordable housing and that was the only option for affordable housing in the neighbourhood. Until now.

On the 14th of May, 2018, less than one year after the New Democratic Provincial Government was elected to office, the Minister of Municipal Affairs and Housing announced an amendment to the Local Government Act to introduce Residential Rental Tenure Zoning. This was not an off the top of the head nice thing to do for the sake of doing kind of amendment (if there ever was such a thing). In speaking with Councillor Collen Jordan, she and Council had been trying to get local municipalities, Metro Vancouver, and anyone who would listen, on board with the concept of granting  municipalities the power to require the market to invest in rental housing through some form of inclusionary zoning. So, it is no coincidence that as soon as an NDP-friendly Council finally found like minds in government, a favourable policy finally came to fruition.

While these powers are available to all municipalities that contain multi-family zoning within the Province of British Columbia, the City of Burnaby has been the most aggressive to be the first to the plate. And this isn’t a conversation about the types of market rental accommodations that have been constructed in Vancouver’s Strathcona or Marpole. Judging from the advertisement below, some of these rental complexes would be ideal for the average renter who could afford a C-Class Mercedes (not knowing whether a C-Class is expensive, I’m clearly not the right demographic).

The types of rental zoning being discussed in Burnaby could only be accomplished with the addition of these new jurisdictional powers, and present an opportunity to be a game changer. Within Burnaby, the City now has the ability to require developers to replace demolished affordable housing units with similarly priced units, and relocate the immediately displaced residents to similarly affordable accommodations within the area. This is a huge win for the residents of Maywood, and for the vibrancy of Burnaby’s Town Centres – neighbourhoods that have been runaway models of success for high density transit-oriented development, but have (at least by reading the promotional material) increasingly become victims of a pattern of luxury living.

The other major change is that the City also has the opportunity to overlay rental tenure zoning requirements atop multi-family residential zoning. This is a massive gain for the City, where there is a mechanism to work in a tangible way with the development community to dedicate whole land parcels or percentages of developments as rental zoning, and require it to be set an affordable rate.

Within this new context, the City is now able to work with the development community to quickly expand the availability of rental accommodations. This has huge potential to finally crack vacancy rates in an increasingly unaffordable rental market – whether it is in Maywood, Edmonds, Lougheed, or the dark windowless basement suite I once previewed near Brentwood that was going for a staggeringly high rate. It is my pedestrian belief that expanding the rental market on a dramatic scale will create the type of real supply that has the potential to reduce overall rental rates. In contrast, expanding supply on the ownership side has resulted in many condos sitting empty for wealthy owners as an occasional use, recreational, or investment egg. In a rental zoned suite, the owner takes a financial hit by allowing a unit to sit idle.

This last observation begs an important point. In a conventional residential development model, there is a low risk that the developer will not have a return on investment. If the market is favourable, the developer can install luxurious finishings and appliances to improve the value of the units, but if the market slides prior to selling the condominium units, the developer can reduce the quality of those finishings and appliances to maintain their profit level. In the end of both scenarios, the developer can sell the property and wash their hands of any responsibility once the strata takes over (with the exception of the short warranty period). In a rental zoned scenario, the suite will rely on a patient investor that is in it for the long haul. As a result, there is an inherent risk to the investor unless the rental is designed to capture the high end of the market like those mentioned above in Vancouver. But, if the city is too aggressive with its rental strategy, a developer may decide to go to a less picky municipality. By this measure, the City may still need some assistance from other levels of government to create additional incentives.

In the mid 1970s through to the 1980s, the federal government through the Canadian Mortgage and Housing Corporation massively incentivized rental apartment construction through tax breaks, and facilitated the creation of co-operative housing developments by backing the construction of these units. Much of the existing BC Housing rental stock was built by these partnerships (there’s a lot of interesting reading HERE, HERE and HERE, to name just a few). Without going into further detail for now, there is a huge opportunity for the federal government to step up to the plate once again encourage the development of the types of housing models that encourage a mixture of incomes in our cities again.

These issues are not exclusive to the City of Burnaby. There is a good reason that there is increasing development occurring South of the Fraser River, in Tsawassen, Surrey, the Langleys, and even Chilliwack and Abbotsford, not to forget the northeast sector beyond Coquitlam. Affordability is a particularly major crisis within the inner municipalities. Burnaby has played the long game with Town Centres by bringing density into transit and amenity-rich hubs. The Province is finally playing their part in trying to address the affordability crisis by providing municipalities with the tools to bring about the kind of change required to keep the Lower Mainland livable for all residents. It is now essential for the federal government to play a role in enriching the quality of life and vibrancy of neighbourhoods for not just Burnabarians or British Columbians, but for Canadians.