Our story begins in 1961, but the story of Burnaby actually began long before. In 1892, the municipality was incorporated because of two main factors: a) the prior establishment of an interurban railway that bisected the municipality from Vancouver to New Westminster, and b) the determination of a group of realtors to establish a government in what was until this point an unincorporated area. In sum: transit and development. The Burnaby Board of Trade produced a video to capture this early history, which includes among other interesting facts, that:

One of the earliest acts implemented by the Burnaby Board of Trade endorsed a regular police patrol on the road to Vancouver, now called Kingsway, to stop dangerous driving – by horse-buggies…

You can learn more about early Burnaby HERE. It is interesting to note that the first proposal for Burnaby commissioned by local residents actually included a large portion of historic Vancouver City incorporated in 1886: 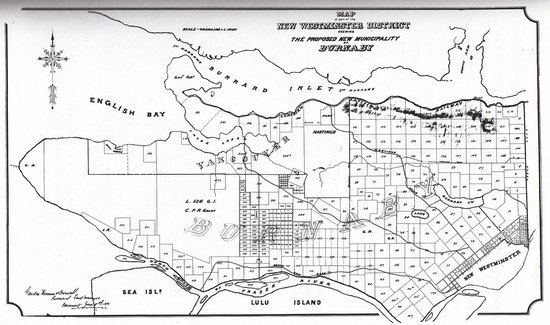 It is noteworthy, residents west of Boundary Road could not come to agreement on aspects of the new municipality. They instead decided to eventually form their own municipality, South Vancouver. It was not until 1929, when the municipalities of Point Grey and South Vancouver were amalgamated into Vancouver to form the current boundaries of the City of Vancouver. The case of folding Vancouver into Burnaby though was never completely closed. In 1968, long-time Mayor Alan Emmott left his term in Burnaby half-way through to pursue the Mayor’s chair in Vancouver. His intention was to push for the amalgamation of the two municipalities as part of a larger regional vision. Emmott lost this election but later returned to Burnaby as a Councillor.

In 1963, Burnaby’s Head Engineer and first Municipal Planner were terminated. Speculation surfaced that the Head Engineer was fired because an NPA Councillor was a previous employee of his, and wanted retribution. The City’s Municipal Planner was fired because the majority NPA Council disagreed with ordered planning, instead preferring spot-zoning. The Planning Institute of BC investigated the termination without cause, but in the end the firng was left uncontested.

The termination of these staffmembers were carried out by a right of centre Council majority. Even though the firings were carried out, there was a strong opposition by the left of centre civic party. The municipality was home to prolific provincial politicians such as CCF MLA Ernest Winch, father of the South Vancouver MLA Harold Winch, who served as opposition leader of the provincial CCF from 1938-1953, and later Member of Parliament from 1953-1972. Additionally, because of the left-leaning roots of Burnaby at this time, when Tommy Douglas resigned as Premier of Saskatchewan, he chose Burnaby-Coquitlam as the seat on which to run as first leader of the federal New Democratic Party. More information regarding this political history can be found in the chapter by Seager and Fowler in Suburb of Happy Homes: Burnaby Centennial Themes, edited by Leonard Evenden.

Leading up to the 1963 election, the left of centre party campaigned on an election platofrm of rehiring the Muncipal Planner. The election resulted in the Burnaby Citizens’ Association forming government with a strong majority of seven Councillors.

In early 1964, after the previous planner turned down the offer to reapply, the municipality embarked on an extensive search to hire a new Planner. By March of the same year, Anthony (Tony) Lea Parr would head the previously underfuned planning department. The new planner was inundated with half-completed projects and frayed planning initiatives. But, before long, he embarked on a detailed study of suitable areas for future development within the municipality. The study was motivated by several key factors. The first priority among Councillors was to enhance the quality of new low-rise apartment construction. One of the Councillors had referred to them as ‘clap-traps’. The second priority was a response to a regional directive for the municipality to absorb a doubling of population over the next seven years. A final reason was to implement the guidelines proposed by the Lower Mainland Regional Planning Board (LMRPB), a federation of local governments preceding Metro Vancouver. They also had produced a planning policy document for Burnaby titled, Towards an Apartment Location Policy.

Under recommendation from Tony Parr, in 1964, Council suspended all apartment rezoning until the Planning Department was able to complete a new development framework. Defending his recommendation, Parr stated:

There’s a right and wrong way to do this. We could do it in a week if we had to, but we wouldn’t be able to substantiate our recommendations.

Over the course of 1964 to 1965, Planning Director Tony Parr developed the municipality’s first comprehensive plan. Those plans, based on the recommendations of the LMRPBS’s Towards an Apartment Location Policy, advised restricting multi-storey development in the municipality to four geographically contained core areas: Hastings, Brentwood, Simpson’s-Sears (modern day Metrotown), Middlegate and Edmonds (together modern day Edmonds). In 1965 upon its release however, the plan hit its first roadblock. NPA Councillor Doug Drummond, with the support of some Councillors, challenged the merits of containing development. Fellow NPA Councillor Emmet Cafferky stoked criticism against the containment policy, noting, “In the future, Kingsway will be one major core, and so will Hastings.” Defending the plan, BCA Councillor Russell Hicks thundered:

If Drummond is not satisfied with the Lower Mainland Regional Planning Board report, or with our Planning Department, he should read planning books at the library.

Further elaborating on his earlier sentiments against the plan, Cafferky agued,

What Councillor Hicks has talked about is not core living – it’s communal living!

Although Parr failed to secure approval for the Apartment Study, he was nonetheless busy setting the principles in motion. In late 1965, a Brentwood high rise plan was approved adjacent to the pre-existing Brentwood Mall. There was a new development site was being discussed for what is now the Lougheed Town Centre. In early 1966, Parr eventually released the revised Apartment Study plan, renewing it in 1969 with a plan of the same title. The concept of four central areas would continue to irritate various members of Council, however with the rejection of a townhouse plan outside one of the designated core areas, Parr’s containment policy was eventually accepted as official municipal policy.

>> Continue reading onto the next section: The Town Centre Model>>